Find out a little more about the Phoenix NMR products available through TalaveraScience!

TalaveraScience is the sales agency for Phoenix NMR throughout Europe, in Australasia and India.

Phoenix NMR has many years of experience in design of and making solid state NMR probes as the team originally working at Chemagnetics which was first acquired by Varian (1997) and then by Agilent Technologies (2009). Phoenix NMR probes are based on the latest version of Transmission Tuning Tube Technology (T3 Technology) to make very RF-efficient narrow bore (NB or SB) solid state NMR probes. These probes have a variety of tuning configurations such as the Phoenix HXY probe with HXY and HFXY configuration and with interchangeable probe heads including 1.2, 1.6, 2.5, 3.2, 4, 5, 6 mm and static probe head options and the Phoenix HX probe with a fixed probe head with

the option of HFX performance providing a very cost effective double resonance probe. These probes are available for wide bore and standard/narrow bore magnets and are a high performance accessory for any NMR spectrometer, solids or liquids.

Please read on for more information... 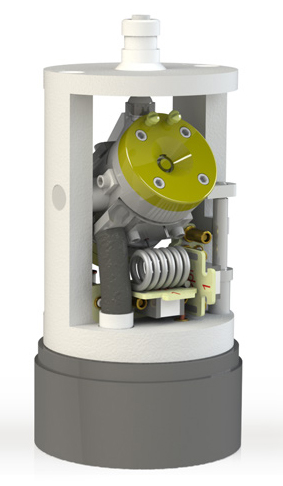 The VT exhaust is visible on the top of the probe head and interfaces with an exhaust chimney which passes through the solution state spinner assembly in the magnet. The VT input is located on the Phoenix HXY Probe Base (see right). The nominal VT range is -125 to +125° C.

The Phoenix HXY Probe Base, depicted below, shows the available RF connections, the CamLock mechanism for holding the probe in the probe frame, the distinctive VT input with heat sink (the black item on the left) to avoid condenstaion and ice formation when running cold, Tachometry is compatible with most NMR spinning speed controllers (if not please see below for the Phoenix NMR spinning speed controller) making the probe highly versatile and future proof. 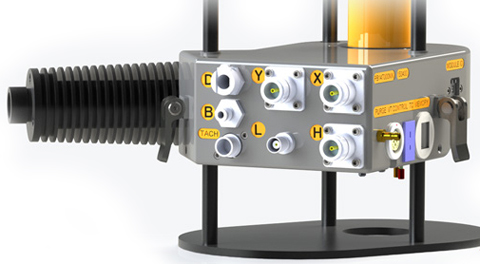 Depicted on the left is an example of the fixed probe head spinning system. The Phoenix HX Probe is available from 400 to 700 MHz (higher frequencies available on request) with spinning systems including 1.2 mm, 1.6 mm, 2.5 mm, 3.2 mm, 4 mm, 5 mm, 6 mm and for static samples. The VT exhaust which interfaces with the VT funnel can be seen on the top of the spinning system as for the Phoenix HXY probe. 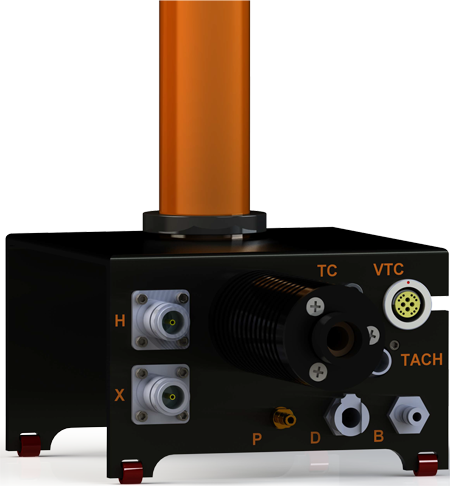 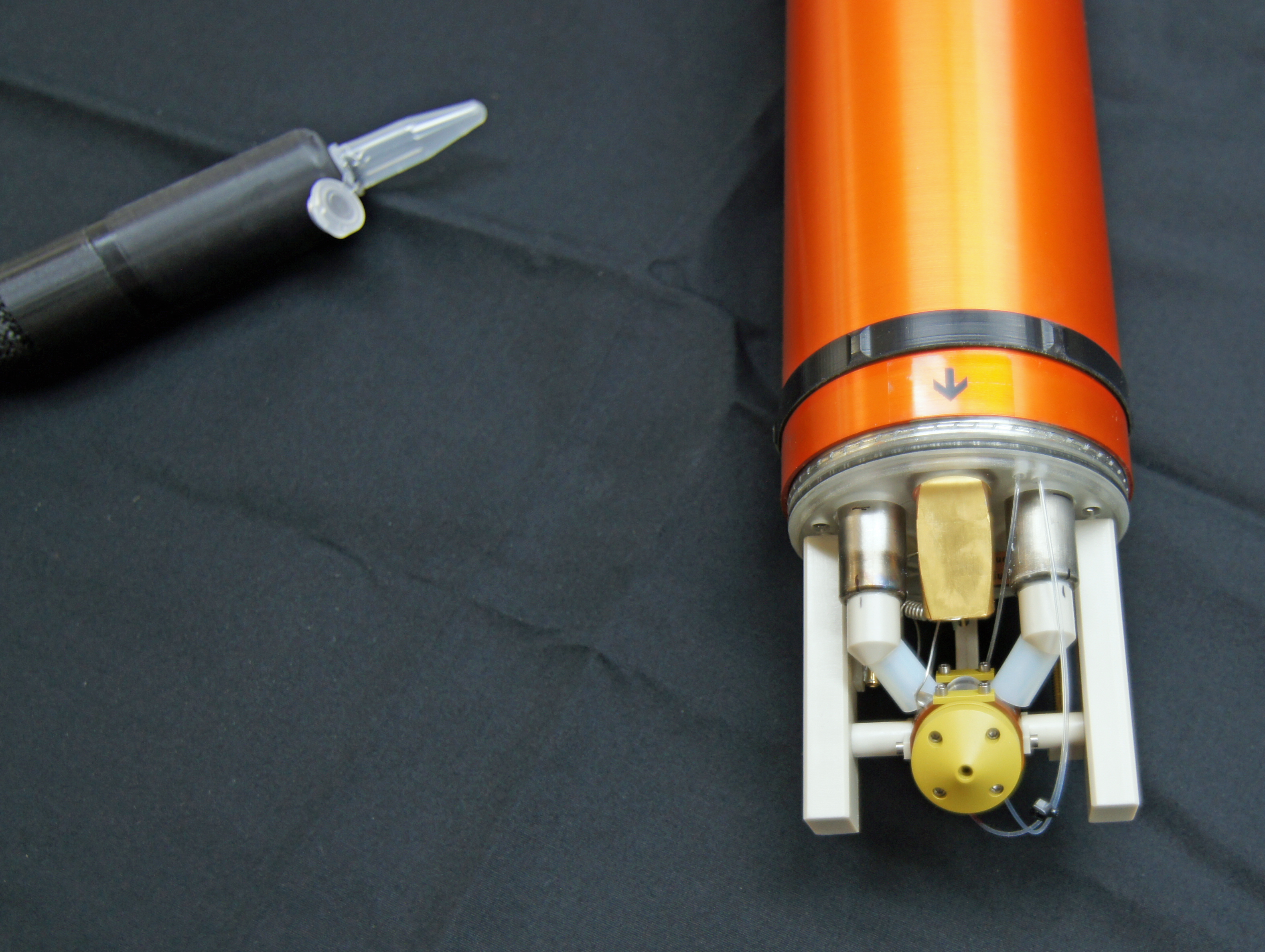 Phoenix NMR's novel sample/insert eject design (see the picture to the right) uses a standard Eppendorf Tube to present the rotor to the insert mechanism. Operating the insert function loads the rotor into the spinning module which is, unconventionally, mounted upside down and a small amount of drive provides enough Bernoulli effect to capture the rotor.

Freezing the sample to form the optimal glass can be done externally to the probe and with the appropriate preparation can be introduced to the insertion mechanism to minimise any temperature increase and not to have any manual handling of the rotor.  The whole sample changing time, while operating at DNP temperatures, can be as short as 3 minutes with about a 7 K sample temperature increase.

Sample ejection is the reverse of the insertion and is facilitated through the Phoenix NMR MAS controller (PMAS).

The spinning module remains fixed during sample changing to avoid disturbing the magic angle setting. The rotor passes through a swept path to-and-from the spinning module. The microwave radiation is delivered by a Bridge12 corrugated waveguide and transversely illuminates the rotor. 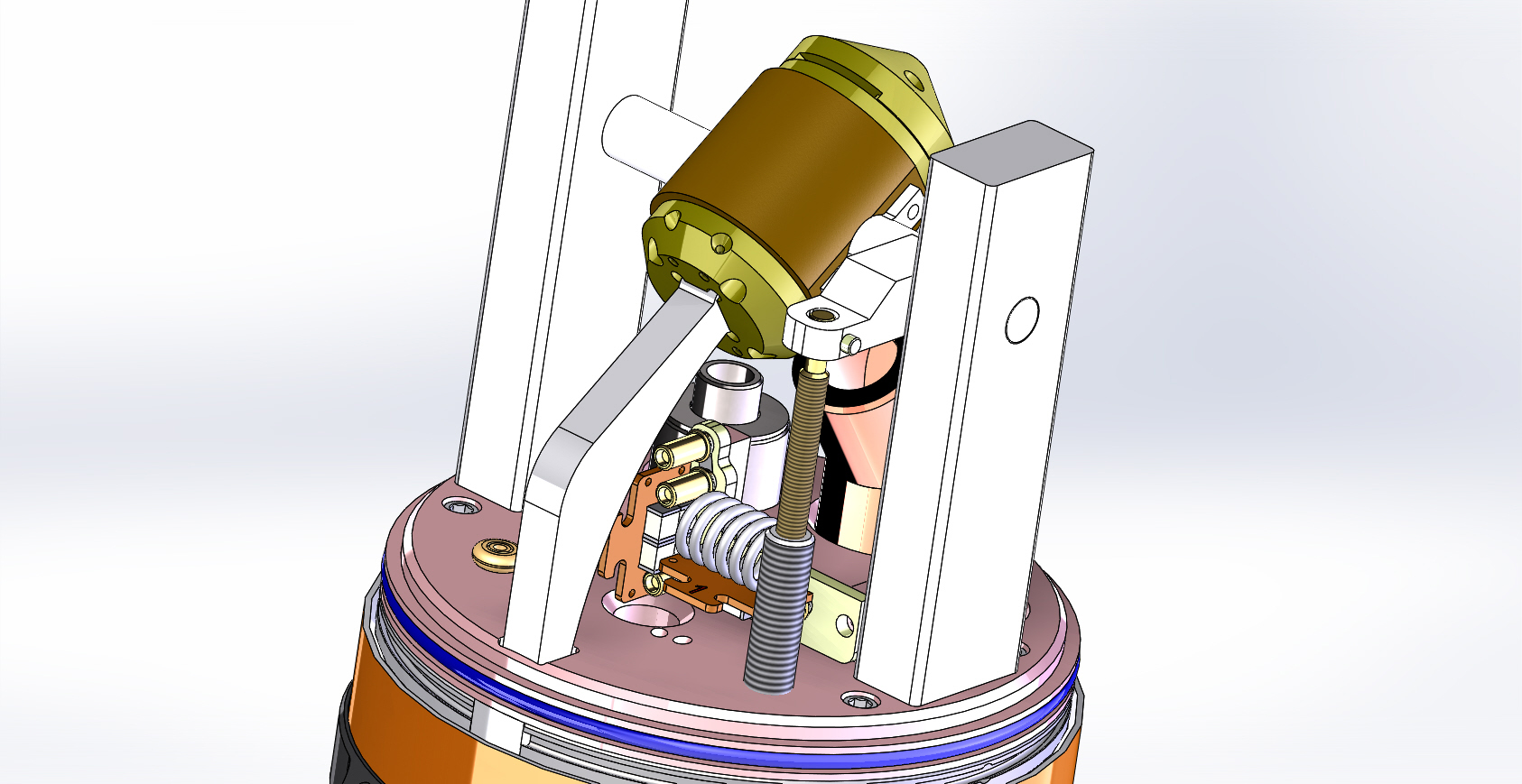 The swept path taken by the rotor can be envisaged in the drawing to the left.  The picture also shows the series tuning elements and the trap which connects the third, Y, RF channel to the RF circuit. The probe uses the same tuning tubes as the Phoenix HXY NMR probe with the same tuning range and characteristics. With the shorted tuning tube and the low gamma accessory, the probe can be used for low gamma nuclei down to 15 MHz. The independent 19F channel is added by utilising the same diplexer technology as for the Phoenix NMR HXY and HX probes.

Closer tuning, less than 20%, can potentially be provided with the use of diplexers to create, e.g., a X/X' RF channel depending on the frequency separation of the two nuclei of interest. 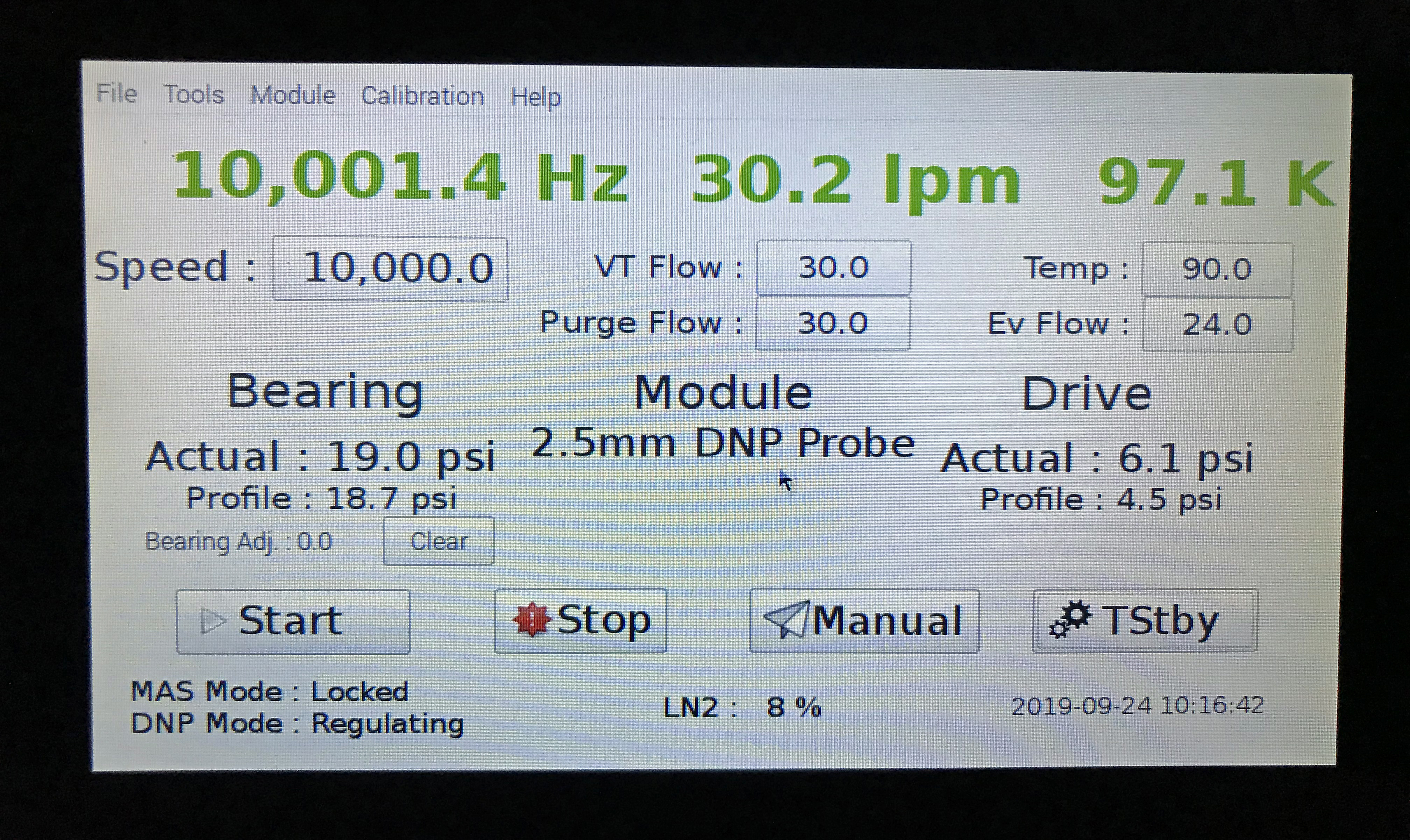 The Phoenix NMR 2.5 mm HFXY solid state DNP NMR probe package is provided with the Phoenix NMR PMAS, as discussed above, and with the Phoenix NMR VT controller. The display of the PMAS is depicted to the right showing all of the important experimental parameters including the drive and bearing pressures, VT and probe purge flow rates, spinning speed, sample set temperature and other information.

Bridge12 provide an efficient counter flow heat exchanger which is designed and engineered to avoid LN2 condensing in the exchange gas stream (which is not good for stable spinning!) consisting of the specially designed transfer lines shown below and a 50 litre dewar which, when filled, lasts 36 hours and can be refilled without interupting the solid state DNP NMR experiment. There is an option that allows dry N2 gas to be generated from the LN2 in the dewar for use as the VT exchange gas.

The dewar and counter flow heat exchanger are designed to be efficient on the use of cryogenic consumables such as LN2 and the whole probe package delivers a reduced running cost alternative as far as this cryogen is concerned. 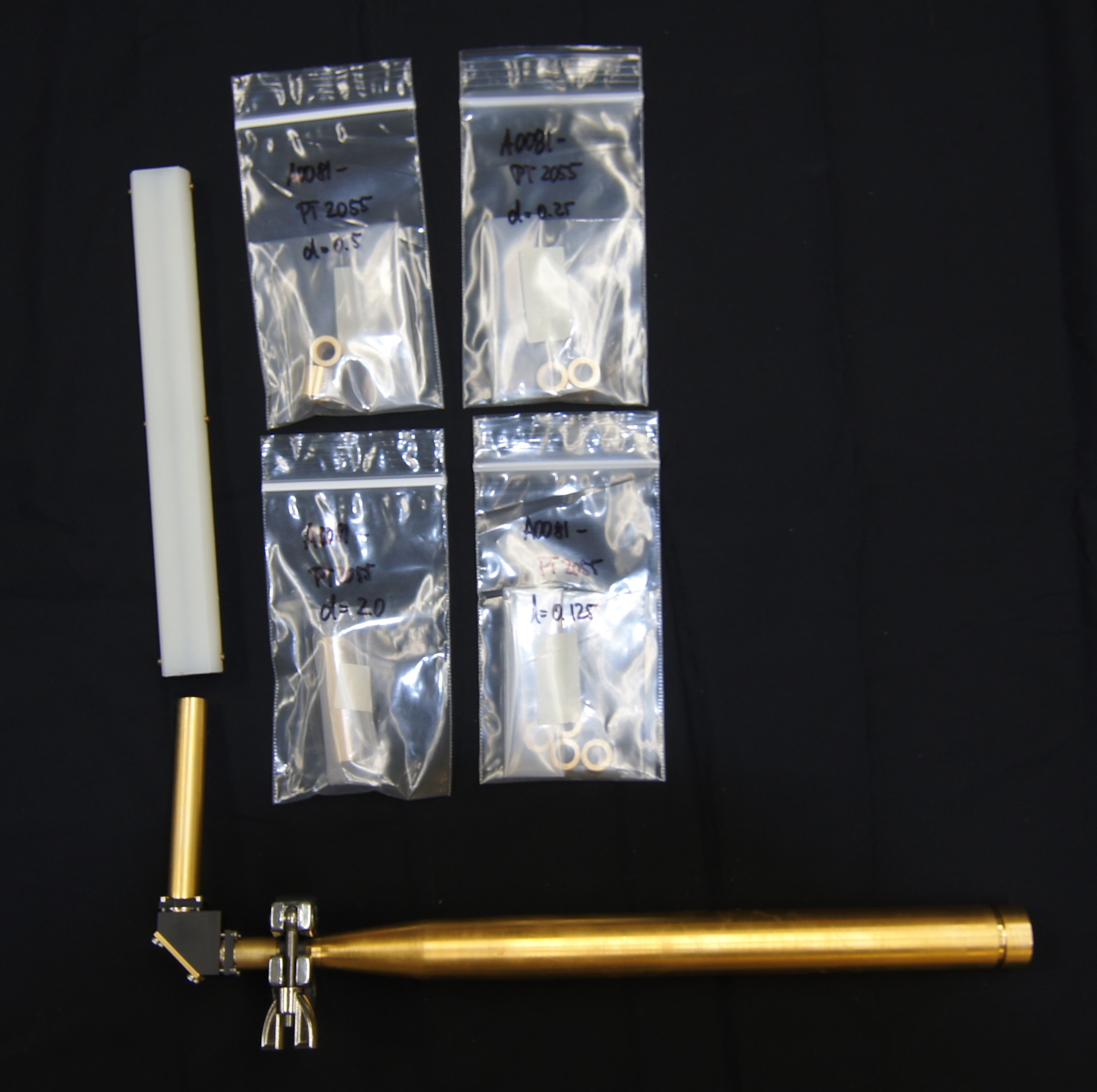 The internal microwave components are designed and manufactured by Bridge12, exploiting  their experience with corrugated waveguides and solid state DNP NMR applications. The figure to the left depicts such a waveguide.

The probe can be connected to the high power microwave source either directly through a coupling waveguide or via a quasi optical mirror which reflects the microwaves from the coupling wave gudie into the probe waveguide for transmission to the sample.

Other Bridge12 products are also useeable with this probe and this includes the modular (cw, pulsed and AWG) High Frequency EPR Spectrometer, equiped with its own sweepable source, which couples to the coupling waveguide and uses the solid state DNP NMR probe as the EPR probe and is useful for determining the EPR spectrum of the label, optimising the magnet field strength for optimal DNP enhancements and determining the T1e of the label.

Zirconia and saphhire rotors are available for the solid state DNP NMR probe.

It allows for instant switching between manual and auto modes, full automation from start to finish, automated PID tuning and continuous time stamped logging of all system parameters! 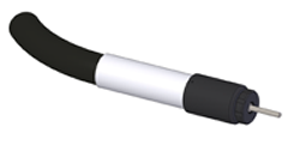 The variable temperature adapter connects a FTS trunk to a Phoenix NMR probe and to a Varian or Agilent solids VT stack with minimal loss between the outlet and probe input. 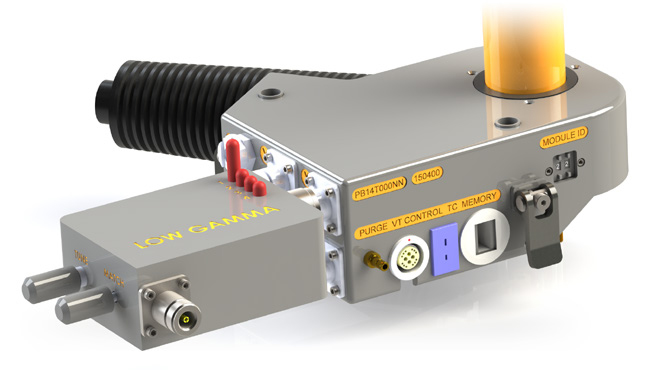 The Phoenix NMR Low Gamma accessory is pictured to the right connected to a Phoenix HXY probe and extends the low frequency channel below 15N down to 15 MHz for both the full range of Phoenix HXY and Phoenix HX NMR probes.

Please speak to us if you need to access resonance frequencies that are below 15 MHz to see if we can extend the frequency range lower. 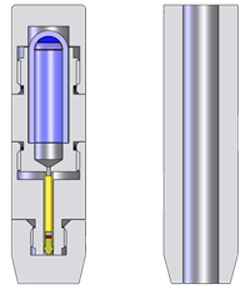 These tools, along with the moulded silcone spacers make it easy to efficiently transfer your pelleted sample from 200 µl ultracentrifuge tubes into a ready to use rotor that will keep your sample hydrated. The centrifuge tubes our tools are compatible with are:

utilising the BioSolids silicone sample spacers. An additional rotor is available to initially shim on 1H to aid final lineshape on 13C.

If you are interested in spacers and tools for a different rotor size, please contact us with your request. 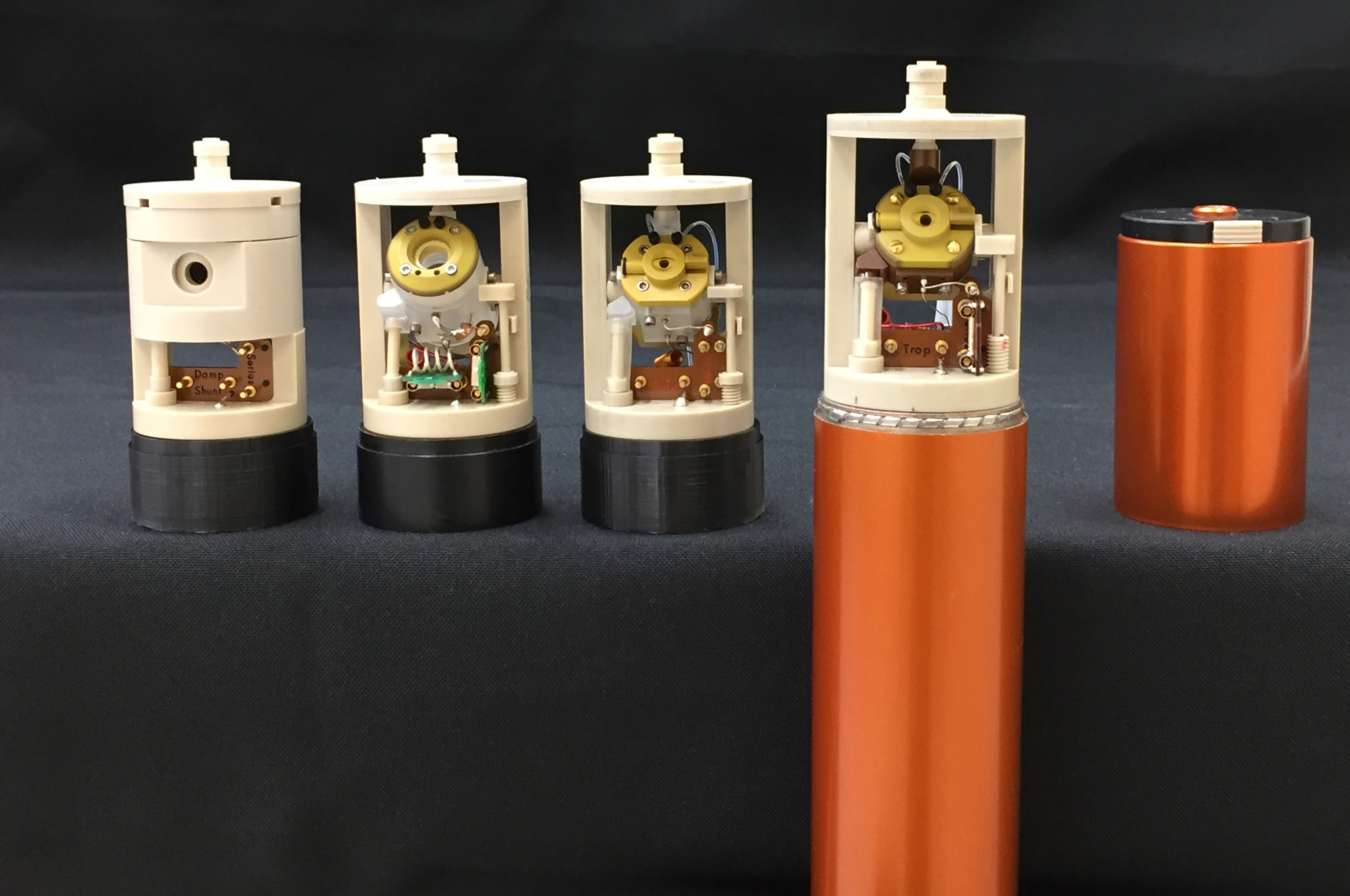